This blog was produced in partnership with the Rethink Outside campaign. Learn more.

Ten years before the COVID-19 crisis and the nationwide uprisings for racial justice, Sierra Club, YMCA of the USA, Children & Nature Network, REI and others set out to form a coalition and address an urgent crisis among America’s children and youth: social disconnection and an obesity epidemic caused by far too much time spent indoors and on screens and glaring inequities in access to quality green spaces and outdoor education.

To help address these problems then and now, the coalition became the Outdoors Alliance for Kids (OAK). A national strategic partnership, OAK focuses on making it easier for young people and their families to develop a life-long relationship with nature and the outdoors and the health benefits they provide. 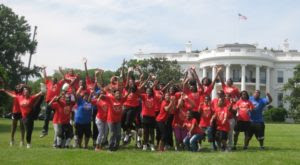 By organizing across sectors that included the environment, public health and youth development, OAK quickly gained public attention and support. One of its first major achievements involved persuading First Lady Michelle Obama to broaden her “Let’s Move!” campaign to “Let’s Move! Outside” in 2010, encouraging kids and families to get outdoors as one solution to the national obesity crisis.

“It was a great launchpad for OAK to get its work started,” says Paul Sanford, National Recreation Policy Director of the Wilderness Society and current OAK vice-chair. To bolster the campaign over the next few years, the Y, in collaboration with OAK members across the country, led 50 summits to raise awareness and increase collaboration among land management agencies and community organizations at the city level.

“We knew that if obesity was the current crisis of the day, and kids weren’t getting outside, that the two were intertwined,” says Katie Adamson, original OAK co-founder and long-term steering committee member and YMCA Vice President of Health Partnerships and Policy. “The future of health and the future of the environment are completely linked.”

In 2015, the Obama administration worked with OAK to develop and ultimately launch its Every Kid in a Park initiative. Welcoming a new and diverse generation into the outdoors and celebrating the National Park Service’s 100th anniversary, the new program gives all U.S. fourth-graders and their families a year of free admission to national parks, waters, forests, monuments and wildlife refuges. OAK amplified and championed the program, hosting dozens of launch events across the country to make sure the pass got into the hands of kids from Baltimore to Hawaii. Within the first two years, over 2 million children signed up for the program, and more than $5 million in private investments were made to support transportation costs to ensure all children could participate.

“It’s more than just giving kids a freebie,” says Sanford. “It really lets them know that public lands are theirs, and to enjoy them with their families.”

When the program later came under threat, OAK successfully worked to save it. The alliance collected 1000 hand-written postcards from children across the country to show the program’s impact, and military children personally delivered them to Interior Secretary Ryan Zinke during a meeting organized by OAK members National Park Trust and Blue Star Families. Days later, the Secretary announced the program would be continued for another year. And, when the Trump administration floated a proposal to raise park entrance fees by more than 200%, OAK helped defeat it by releasing a bipartisan poll that voiced Americans’ concerns and mobilizing its members to advocate, demonstrated once again the power of partnerships.

In 2019, the alliance worked with policymakers to pass the Every Kid Outdoors Act, to ensure the program would continue, regardless of administration, to serve nearly four million children and their families with an invitation to their parks and public lands. The legislation renamed and formally authorized the Every Kid in a Park initiative for seven years. Along the way, OAK continued to gain important allies including young people such as Robbie Bond, Lily Kay and Tigran Nahabedian.

Working Side-By-Side with The Next Generation 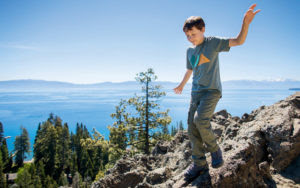 Robbie Bond grew up in Hawaii, experiencing and learning about the outdoors from his grandpa, the manager of Hanauma Bay working for the Honolulu City and County Parks Department. Robbie wanted other children to have the same kinds of opportunities he enjoyed. In 2017, when he was just nine years old, Robbie founded the nonprofit organization Kids Speak for Parks. Last year, he spoke to the Director of National Parks and the Deputy Director in the Office of External Affairs at the Interior Department and visited Washington, D.C. to speak with members of Congress to help the Every Kid Outdoors Act pass. He’s also connecting with more kids with his own comic book character and documentary as part of Marvel’s Hero project, which features young people making change in their communities. 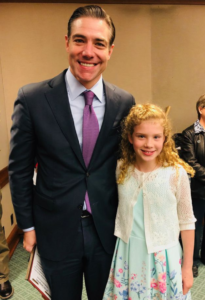 “What grade do kids need to be to get into Texas parks for free?” Lily Kay wondered because there were many more state parks in Texas than the one national park, which is about an 8-hour drive from where she lives. The answer was “they don’t.” So Lily wrote to her state legislator, asking him to expand free admission to state parks for 5th graders and their families. The KAY BILL passed, named by Lily and standing for Kids: Active, Young, Brave, Intelligent, Learners and Leaders, was signed into law. However, the language mirroring the federal law to include free admission for family or friends in the car was removed. Now Lily and OAK have joined forces to continue to voice the need for access to parks in Texas and nationwide so that other kids and their families can fall in love with exploring outdoors.

When Tigran Nahabedian was just five years old, his family took him to his first national park, where he participated in the junior ranger program. “It became a family tradition to visit parks together,” says Tigran. After participating in Michelle Obama’s Let’s Move Outside campaign, he was selected as the first National Park Trust Buddy Bison Student Ambassador at age 10. That gave him the opportunity to join with Buddy Bison to help launch the Find Your Park Campaign in Washington D.C. Now in high school, and as an alumnus of the Buddy Bison program, he mentors 17 new ambassadors entering the program.

Early in 2020, OAK moved forward with efforts to connect more kids and families to the outdoors and geared up to launch its Every Kid Outdoors in State Parks campaign, to expand the impact of the federal program to state park systems. Right now a fourth grader in Pueblo, Colorado, one of the lowest-income cities in the nation, would have to travel an hour and a half to use their free pass at the nearest national park, but would pay to get into Lake Pueblo State Park, just outside of town. The campaign to expand to nearby state parks was just about to activate when the COVID-19 global pandemic struck.

Within a matter of weeks, the nonprofit sector and all the many organizations within OAK worked to respond to a new reality that magnified existing racial and social inequities. OAK quickly mobilized its members, big and small, to support and share CDC guidelines and promote resources for staying safely engaged with nature during the pandemic. The YMCA went into emergency response mode. The Wilderness Society worked to ensure public land organizations providing valuable public services survived. The American Heart Association created a multi-faceted response that spans from research to community care. And alliance members saw how the work of OAK became even more relevant and important.

“The pandemic is highlighting the fact that green space is much more available to some people than others. That shouldn’t be the way it is,” says Sanford.

As OAK enters its tenth anniversary, it does so with the understanding that all of its significant accomplishments will be for naught, if the alliance doesn’t make a dedicated effort to address the structural racism that pervades society. “In addition to the pandemic, Black, Indigenous, and people of color live under a constant threat of racist violence and harassment from police and individuals, and these threats extend to our public lands,” says Jackie Ostfeld, Director of the Sierra Club’s Outdoors For All campaign, and Founder and Chair of OAK. We need to create a tomorrow where every kid can safely restore their mental and physical health outdoors.”

Today, OAK is redoubling its efforts. By welcoming more kids and families outdoors, OAK increases the nation’s social and emotional health and ensures that parks are protected and available whenever and wherever people need them. Find out how you can join in getting Every Kid Outdoors.

Making Sure Every Child Receives the Benefits of Time Outdoors | OAK