Working for Latino Outdoors, Ruby Rodriguez wants to ensure that others can more easily follow in her footsteps

“Today, I’m the person I knew I could be—if given the opportunity,” says Ruby Rodriguez.

That includes connecting her community in Fresno, California, to Yosemite National Park. The project is funded by the National Park Trust, and it’s part of her work as the director of programs and operations for Latino Outdoors, an organization that connects and engages Latino communities in the outdoors. 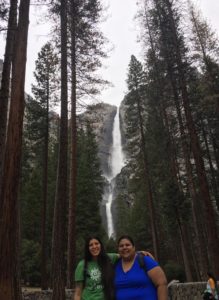 She first visited Yosemite in 2009 while going through intense personal and marital issues. To cope, she would drive in an area that she considered to be “the country,” because it felt calm and soothing. She liked to look at the scenery because it brought back memories from her childhood of playing outside in a ditch—what she would later recognize as riparian habitat. Those comfort-seeking drives eventually brought her to the majestic park. On her third such trip in 2010, she brought water and workout clothes. She parked at Nevada Falls and embarked on her first-ever hike.

It was the most physically challenging thing Rodriguez had ever done. It was also tough emotionally. “I didn’t know what I was doing,” she says. “I saw other people in gear and happy, and I was way out of my comfort zone.” Part of that discomfort came from not seeing anyone who looked like her, nobody from her nearby community.

At the same time, Rodriguez experienced the benefits of being outdoors in a beautiful and awe-inspiring place. She felt the presence of a higher power and the sense of being part of a larger story. She remembers thinking, “Damn, I have potential.”

In that moment, it all came flooding back: the happy times Rodriguez had spent outside as a child and the growing disconnect from nature she experienced as she aged. But her return to the outdoors wasn’t instantaneous.

Rodriguez became a mother when she was only 16. Finding her identity as a parent would have been challenging at any time of life, but she had the additional struggle of trying to resolve her own trauma of being told she wasn’t good enough and yet knowing she could do better for herself and her child.

When she wanted to transfer from community college to a university and was scrolling majors at the California State University at Fresno website, she saw Recreation Administration. “That’s something I could stick with,” she thought.

Her moment of resolve came a couple years after that as she was going through a divorce and expecting her third child with no degree and no job. She thought, “This isn’t the life I want.” 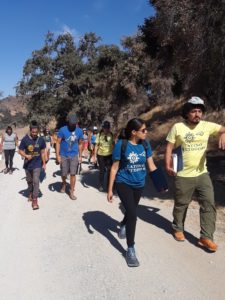 Determined to earn her degree, she discovered that Humboldt State was the only school still accepting applications. She’d never heard of it before. She looked more closely at the school and its recreation program and thought, “This place is amazing.” But when she submitted her application, she received an error message. She nearly gave up, but a couple weeks later tried again. It went through, and soon her acceptance letter arrived.

As she prepared for this new path and after a trip to Hetch Hetchy with her newborn, she decided something must be done about the lack of Latinx people at Yosemite. Craving connection, she found Latino Outdoors on Instagram.

At Humboldt, as an older student and single mom, Rodriguez wasn’t the typical recreation major. As she did her best as a mom and student, she grew more confident in her sense of self. She learned more about the benefits of being outdoors and thought, “I’ve experienced this.” Rodriguez also used outdoor recreation to promote wellness and strength in her children. Her youngest learned to walk while hiking.

In 2016, the year she would graduate, Rodriguez became an ambassador with Latino Outdoors and participated in her first-ever leadership campout. With support and encouragement from her academic advisor, Dr. Marchand, Rodriguez pursued her interest in diversity, equity, and inclusion within the outdoor recreation field. She knew what it felt like to be uncomfortable on trips with her young, white classmates and then making the same trip with Latino Outdoors and feeling like she was home.

The summer after she graduated, she became a student intern for the Outdoor Foundation’s Outdoor Nation challenge, designed to help with diversity and inclusion in outdoor spaces. The competition included 87 universities competing for the title of Most Outdoorsy College in the nation. As the student coordinator, she helped plan the messaging, outreach, and events with students logging their activities on an app. “I learned so much,” she says. “And we won the competition.”

When she first graduated, Rodriguez thought she would become a park ranger. “But I quickly realized that those positions weren’t created with single women with children in mind.” Instead, Latino Outdoors hired her. She continued to grow in her roles and responsibilities, balancing the challenges of work and parenting. 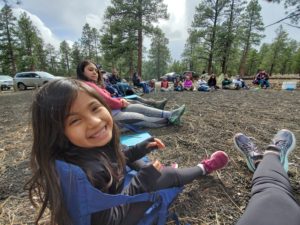 In 2020, the pandemic offered more opportunities to reflect and grow, and included taking on the role of teacher for her children. That experience made Rodriguez think about home. “I was born and raised in Fresno. I have a small but mighty circle of caring family and friends there. All the healing and growing that I’ve done has contributed to improving my relationships. Having a better relationship with my mom was another motivating factor,” she says.

Now, Rodriguez is back at the place that started it all, leading others to the same kinds of awe-inspiring experiences, connections and opportunities. She’s especially proud of how she’s grown as a mother and a leader. “It’s hard to be a woman of color in a leadership position. It’s an ongoing challenge that requires you to heal those parts that have been sent messages that you aren’t enough,” she says. But now she’s showing her children and others what’s possible.

“I’m doing all the things I imagined I would,” she says. “And nobody can take that away from me.”

This article was produced in partnership with the Outdoors Alliance for Kids, a national strategic partnership of 100+ organizations from diverse sectors with a common interest in connecting children, youth and families with the outdoors. This article was originally published on RethinkOutside.org.