The North Face Ambassador Juan Martinez’s life has been shaped by many experiences but defined by a single opportunity. In 9th grade the South Central LA native received an ultimatum: Either go to detention or go to Eco Club. Juan chose Eco Club, and the rest is history. Today Juan’s an outdoor advocate, a role model, and a mentor. And it’s all because of that one chance. Here Juan tells us about the influence his father has had on him, and he also shares a bit about a new initiative he’s working on: Green Play to Green Pay.

I grew up watching my father work his hands until they became calloused, laboring to the point where he could wring out the sweat from his shirt. Sometimes he’d come home bleeding from his day trying to make a living. Although my father took pride in every aspect of what he did, his paycheck never seemed to reflect his level of sacrifice or the long hours he spent away from his family. 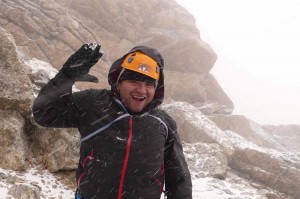 This impacted me as a child, and it made me dread the thought of working. Not because I was afraid of hard work, but because I wanted more than just a paycheck at the end of my day. As I witnessed my father’s sacrifice, the thought of turning my newfound love for being outdoors into my profession felt naïve — almost irresponsible, even. I had no idea where to begin or what steps I needed to take.

Luckily I had mentors who guided me through the process, and now I find myself an Ambassador for The North Face; a member of the Board of Directors for the Sierra Club Foundation; a National Geographic Emerging Explorer; and the Director of the Children & Nature Network’s Natural Leadersprogram, doing some of my most important as I empower other young people to view their connection to the outdoors and the skills gained through such endeavors as a career opportunity and potential profession. It’s what I consider my life’s work

A few weeks ago, members of the Natural Leaders program, along with key partners, gathered to take part in our inaugural Green Play to Green Pay Summit at the National Conservation Training Center in Shepherdstown, West Virginia. We define Green Play to Green Pay as the process of translating the passion and skills gained in nature to a livelihood that values these experiences both intrinsically and economically.

The goal of the Green Play to Green Pay initiative is to empower diverse, young leaders to merge their passion with their purpose, providing them with much more than a paycheck at the end of their day. This initiative also aims to help to close the diversity gap in the outdoor field while challenging the status quo to become more culturally relevant. Additionally it will work to pass valuable skills and knowledge on to the next generation. 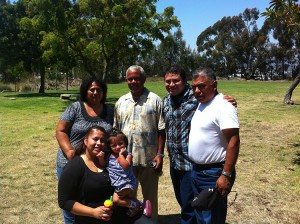 Thinking back to my childhood, I remember that on some weekends my father would pile the five of us into our small but reliable 1985 Chevy, and we would pull up to a completed work site and he would tell us a story for every single wire or bolt that he had touched. My father truly epitomized the phrase “labor of love” in everything he did, and as a young child I hoped to one day live a life that reflected such passion for my own work — a passion my father continues to demonstrate today.

My father and I have switched roles these days, and now I take him on hikes out to the Arroyo Seco trail in Pasadena, California, a trail I worked on during one of my first jobs with Outward Bound Adventures. On the trail we often eat a lunch of quesadillas or chiles rellenos that my mom has packed for us; and as we hike the path, I tell my father stories of the rocks and of the trees that I had a hand in preserving. I am thankful for the sense of pride in my work that my father has passed on to me. And I am thankful to be able to spend each day doing what I love — being outdoors with others who share the same passion. 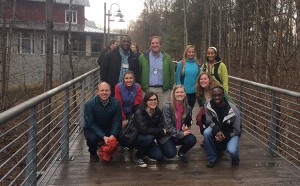 For more information on the Natural Leaders program and the Green Play to Green Pay Initiative, and to learn ways you can turn your passion into your purpose visit http://www.childrenandnature.org/naturalleaders/